Confessions of a Rubbish Book Marketer.

These last few weeks have been pretty manic as I juggle the demands of marketing Murder Served Cold (link to my book here) with the equally urgent demands of finishing off its sequel, provisionally entitled Rough and Deadly in order to meet a December deadline that’s galloping towards me faster than the January sales.

I’m used to writing to deadlines, having written a monthly column in Writers Forum for the last eleven years (although the editor would probably confirm I’m one of those contributors who make the deadline by the skin of their teeth each month).

But writing a novel to a deadline is a very different matter.

But even so, that’s something I am far more comfortable with than the other thing that’s been demanding my attention like an over-indulged two year old since way before my book launch in October.

One of the first things I did was to sign up for a blog tour. (But even that, I left a bit late and the blog tour took place several weeks after my launch date.)

I chose Rachel’s Random Resources because I’d heard some very good things about Rachel from my fellow authors at Crooked Cat books.

What Rachel (and others like her) does is gather together a number of book reviewers who will, in exchange for a review copy of the book, read it and, hopefully, review it.  (although they are under no obligation to do so) on such places as Amazon, Goodreads etc.  Reviews are of vital importance to an author as they do so much to improve a book’s ‘findability’. (Have I just made that word up?)

Now, I ‘m not a stranger to writing.  I’ve had over 400 short stories and serials published in various magazines both in the UK and overseas.  But the thing about writing for a magazine is that you only (!) have to please one person – the editor.  Either he/she likes it, in which case you have a sale.  Or he/she doesn’t and it’s back to the drawing board.  As for the readers, if they don’t like what you’ve written, they can move on to something else within the magazine. So it’s not a complete waste of money for them.

Over the years I’d got used to this way of working.  I have even, in that time, had some very positive feedback from readers, which is pretty rare in the world of magazine writing – or at least it was for me. (Do let me know if you’re one of those lucky writers who have loads of positive feedback all the time.  I’ll probably be insanely jealous but I’ll give you a name check!)

I am, like many writers, an introvert.  It takes a lot to persuade me out of my comfort zone and I don’t mind admitting I’ve found the whole process of bringing a book out both terrifying and exhausting.  Each day the learning curve appears steeper.

But none more so than the start of my blog tour. 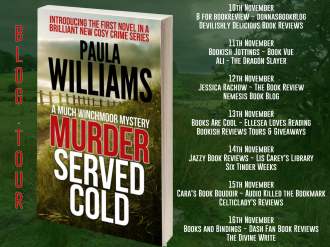 It lasted a week and I could hardly sleep the night before, for fear of what the reviewers were going to say about it.  I’ve heard about far, far better writers than me getting 1 or 2 star reviews and having to deal with the crippling effects these can have on a writer’s confidence.

But I didn’t have any self confidence to start with, so I was pretty sure that a bad review would mean the end of my career as a writer of crime novels.  I know many writers suffer, as I do, from what’s known as ‘imposter’ syndrome, the belief that you’re not as good as everyone else and it’s only a matter of time before you get found out.

So I was taking a pretty big gamble with this blog tour.  But then again, if I didn’t do it, then only a handful of people were going to hear about my book and this would make my publisher (and me) very sad.

The results are in…..

But I’m glad to say the reviews were good. I’m sure part of is thanks to Rachel’s skill in selecting reviewers who will probably enjoy books written in my genre.

In fact, the reviews were much better than I dared hope.  Shall I put them on here?  Probably not because although my lovely mum (to whom my book has been dedicated) has been dead a long, long time she still murmurs in my ear every now and again and is even now telling me not to ‘show off’. (She wasn’t that impressed with Murder Served Cold either and told me I was ‘no Agatha Christie’)

But having said that, if she was still around, she’d have been that proud of me people would have crossed the road to avoid having to listen to her banging on about it! (Even though I’m no Agatha Christie).

But sadly, showing off is what book marketing is all about – which is why I’m not very good at it.  But this is where the value, to me, of this blog tour came in.

I’m not sure if Rachel and her reviewers have any notion of how their kind words (Rachel was brilliant and very reassuring every time I started panicking!) saved this fledging new career of mine.  Every day of the tour, with each good review  I grew a little in confidence until by the end of the week I began to believe that I might just have written a book that people might actually want to read.

It’s a really big deal when someone buys my book and I feel the responsibility keenly.   I want to give each and every one a hug.  Unlike a magazine, the reader’s money is totally wasted if they don’t like my work. It’s not like they can flip over to the recipe section to find something they do like as they can in a magazine.  But it’s not just money they’ve wasted.  It’s the time they’ve invested in reading my book.  That’s an awesome responsibility.

So to all those readers who took a chance on this unknown (to them) author, a big thank you.  And to those lovely readers who leave a review on Amazon, Goodreads etc, an even bigger thank you.

And for my next meltdown…..

I’m now going through yet another crisis of confidence as I am getting close to finishing the second book in the series.  Writers thrive on the question ‘what if?” Asking and answering it can lead to many a good twist and turn.  But sometimes those two little words can work against you.

What if Murder Served Cold a fluke?  Am I about to get found out after all?

But that’s a blog for another time.  I started writing Rough and Deadly (provisional title) on a high.  It was great meeting up with the characters from Murder Served Cold (those who hadn’t been murdered of course) and I couldn’t wait to see where they would take me this time.

But then came the doubts.  The what ifs….  What if I can’t do it again?  What if I’m one of those people who can only write one book?  What if…. 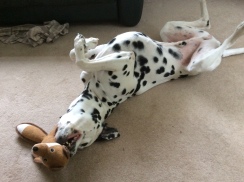 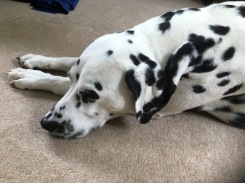 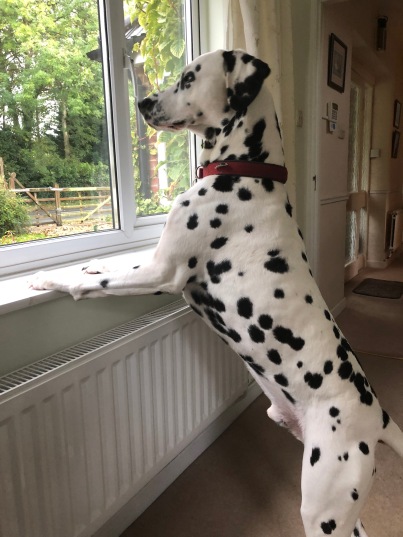 This week sees us celebrating a very special anniversary.  It’s exactly a year since we collected our rescue Dalmatian, Duke, from BDW,  British Dalmatian Welfare via a wonderful couple who fostered him while he was between homes and saved his poor damaged tail. (Thanks, Cass and Geoff!)

When you register with BDW, you are asked to fill in a wish list of the sort of dog you would like.

I’ll be talking to author Rosie Travers and asking her where she got the idea for her book “Theatre of Dreams” from.  I will also post the Daily Prompts for 1st to December 15th.

10 thoughts on “My first blog tour, self doubt and a very special anniversary”